Injury 2. The bearing cage was broken. After the deep groove ball bearing was locked, it was found that there were five breaks in the non-printing surface cage, one of which was exposed with steel balls, and the typing surface cage was broken in four places. Under normal working conditions, the steel ball drives the cage to rotate, and the force of the steel ball on the pocket is negligible. If the bearing does not run normally, the internal steel ball will make a hole with the cage.

The abnormal collision of the wall caused the cage to run unsteadily, causing swing and bounce. During the operation of the faulty bearing, due to the large axial load, the steel ball will have an abnormal collision with the cage pocket, causing the cage side beam to generate periodic tensile force, causing fatigue cracks and then breaking.

Injury 3. After removing the sleeve, check the surface quality of the groove of the deep groove ball bearing ring. The groove of the inner ring is biased to the side of the big letter end, peeling off seriously along the circumferential direction, accounting for half of the groove width. The outer ring channel is biased to the side of the typing end, and the peeling along the circumferential direction of the channel is also very serious, which also accounts for half of the channel width.  SKF 23240 CCK/W33 bearings online , pls click here : 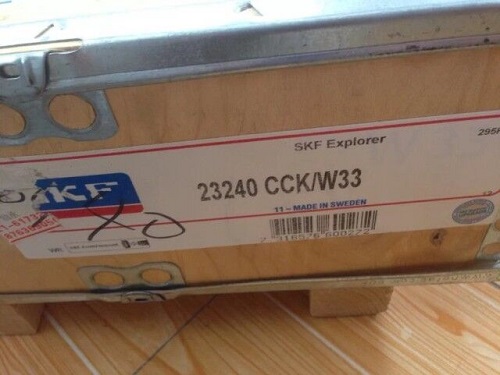 Deep groove ball bearings mainly bear light and medium radial loads, and can also bear certain axial loads, but excessive axial loads will increase the load of the ball and raceway, causing the bearing to fail, and the working track of the failed bearing is not The central position of the raceway of the ferrule, therefore, will eventually lead to serious spalling of the inner and outer raceways of the bearing.