Causes of Magnetic Marks on the Outer Ring of FAG Bearings

Defects are more likely to occur during metal thermal processing. For example, during forging processing, cavities and micro-cracks caused by overheating of forging are likely to become fatigue sources of bearing contact fatigue failure. Here is a list of magnetic marks on the outer ring of a certain FAG bearing on the railway. I hope you can understand some common problems in the forging and processing of bearings.

1. Magnetic marks on the section of FAG bearing outer ring

The magnetic marks of a certain bearing outer ring on this railway are located on the end face of the ring, and are densely distributed along the circumferential direction in the form of short lines or dots, and the distribution area is about 1/3 of the circumference.

A metallographic sample of the magnetic mark on the end surface of the FAG bearing outer ring was prepared, and the sample was slightly polished and observed under a magnifying glass. It can be seen that there are a large number of small pit-like defects densely distributed on the end surface of the bearing outer ring. This defect shining under the light is caused by the reflection of the bottom or side wall. Pit-shaped defects vary in size, but it can be roughly seen that their shape distribution direction is along the circumference. ERIC BEARING LTD have rich stock for FAG 7307B.TVP bearings , if you interested , pls contact us . 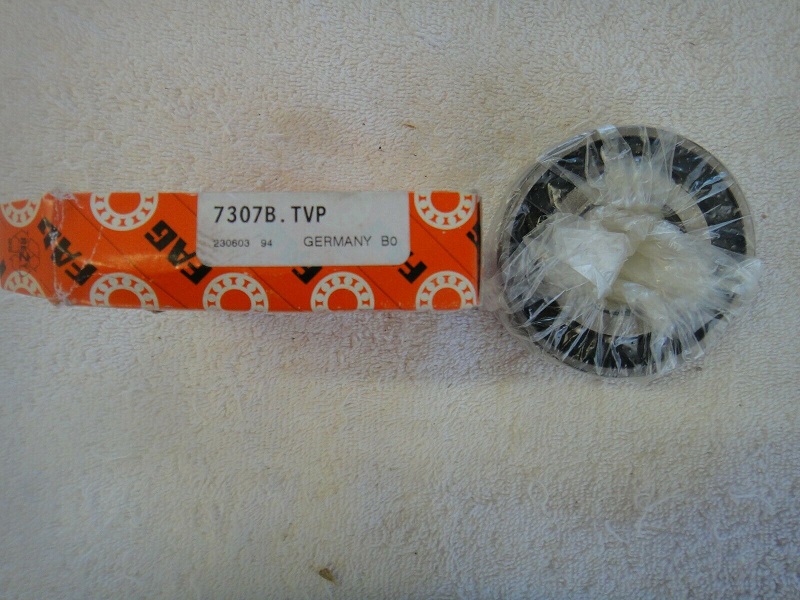 2. Some common defects on the surface of FAG bearings

Forging over-firing will cause the grains of bearing steel to grow. In severe cases, not only the surface metal grain boundaries are oxidized and cracked, but also in areas where the internal components of the metal are segregated seriously, the grain boundaries also begin to melt, forming sharp-pointed holes. If the forging of the bearing steel causes holes in the finished ring structure, there are also two situations:

(1) Within the specified temperature range of the process, severe segregation of local tissue on the ferrule causes local overburn;

(2) Too high forging temperature causes the grains of the entire ferrule to grow, the grain boundaries begin to melt, and holes are formed in the structure.

In the above two cases, the growth of grains in the area where the hole is located is inevitable. Therefore, when the fracture of the forged burned area is observed, there are generally shimmering crystal grain edges, called stone-like fractures.

Observation of the fracture of the smashed magnetic trace ferrule showed that the fracture was fine porcelain, indicating that the metal crystal grains did not grow up significantly; through scanning observation, there were holes on the fracture surface. This situation is different from the typical fracture state of forging overburning, and the metallographic inspection found that most of the holes are distributed in the carbide belt, which makes it doubtful that the holes in the ring structure are generated during the forging process.

4. The reason for the magnetic marks on the outer ring section of the FAG bearing

After analysis, it was learned that the holes in the FAG bearing ring had appeared in the bar. According to the analysis of the steel supplier, the high temperature during the billet rolling of the steel ingot caused the low-melting material in the segregation part of the steel to melt, resulting in Local overburning is a fundamental cause of microscopic porosity. Because the small holes are distributed in the carbide accumulation position, it indicates that the low melting point substance on the carbide belt first melts and creates voids, forming holes. Based on the above analysis, the magnetic marks on the end of the ferrule are related to the microscopic pores of the raw material.

(1) One of the common factors of magnetic marks on the end face of the outer ring of FAG bearings is caused by the distribution of microscopic pores and carbides in the raw material.

(2) The second common factor of magnetic marks on the end surface of the FAG bearing outer ring is that the cause of the microscopic holes is related to the hot rolling process of the bearing steel.