If two incompatible greases are mixed, never mix incompatible greases. Usually the consistency will become soft, and finally it will be damaged due to the easy loss of grease. If you don’t know which kind of grease your IKO bearing originally used, you must first remove all the original grease, and then add a grease to lubricate.

In the process of using stainless steel, we often encounter such and other situations, how these conditions are formed, and how to solve them when they are formed. It has always been the most troublesome problem for the technical staff of major enterprises. The cause and solution of the overheating phenomenon in use will be explained in detail: the instantaneous high temperature in the grinding area can make the surface heated to a temperature higher than the workpiece tempering heating within a certain depth (10 ~ 100nm).

Generally speaking, grease with high viscosity and poor fat solubility is better waterproof. Even if the grease is filled with water in the stainless steel bearing cavity, it can form an oil film on the surface of the steel that can resist.

Due to the low speed of bicycles, the choice of grease can be relatively high in viscosity, but the type of water resistance is very strong, because bicycles often deal with water in car wash, rainy days, off-road, which makes water resistance very important, even if it is Slightly viscous grease will not affect the smoothness under low rotation, and once the surface has formed oxidative damage, the entire peeling process and aging process will be rapidly intensified.

After the installation of the high-temperature bearing is completed, in order to check whether the installation is correct, a running inspection is required. Small machinery can be rotated by hand to confirm whether it rotates smoothly. The inspection items include poor operation due to foreign objects, scratches, and indentations, unstable torque due to poor installation, poor processing of the mounting seat, excessive torque due to too small clearance, installation errors, and seal friction, etc. Wait. If there is no abnormality, power operation can be started.

The power operation starts from the no-load low speed and gradually increases to the rated operation under the specified conditions. The items to be checked during the trial operation are whether there is abnormal sound, IKO bearing temperature changes, lubricant leakage or discoloration, etc. If an abnormality is found, the operation should be stopped immediately, the machine should be inspected, and the high-temperature bearing should be removed for inspection if necessary.

It is easy to enter the inside of high-temperature bearings along the shaft. It is best not to apply oil or grease to the bearing room. If it is not necessary, it must be controlled not to accumulate in the bearing room.

2. The prevention of paint rust: The characteristic of paint rust is that it is frequently used in sealed motors. The motor sounds very well during assembly, but after being placed in the warehouse for some time, the abnormal noise of the motor becomes very large, and the IKO bearing is removed. There is severe rust. In the past, many manufacturers would think that it was a bearing problem. After our continuous promotion, the motor factory has realized that it is mainly a problem of insulating paint.

This problem is mainly because the acidic substance volatilized from the insulating paint forms a corrosive substance under a certain temperature and humidity, which causes damage to the high-temperature bearing after corroding the bearing channel. At present, the problem can only be to choose good insulating paint and assemble it after drying for a period of time.

4. Bearing assembly method: Because the bearing is a high-precision product, it is easy to damage the IKO bearing channel if improperly assembled, resulting in damage to the high-temperature bearing. When assembling the bearing, there should be a special mold, which can not be knocked at will. When pressing into the shaft, only a small ring can be used to force, when pressing a large ring, only a large ring can be used. Air pressure or hydraulic pressure is required during assembly, and the top and bottom touch during press-fitting should be outside the horizontal state.

If it is inclined, the bearing channel will be damaged due to the force and the bearing will produce a noise.

Main points for solving the burn maintenance of IKO bearings

Using advanced tools will accurately determine the problem. There is slight peeling and other damage, and abnormal sounds and irregular sounds can also be emitted, which can be distinguished by a sound meter.

Therefore, it is necessary to analyze and compare the measured values ​​of each machine in advance to determine the judgment standard.

IKO bearing parts are affected by abnormal high temperature during use, and they cannot be cooled in time. The phenomenon of high temperature tempering or secondary quenching on the surface structure of the parts is called burns.    ERIC BEARING LTD can supply different type IKO bearings , if you interested NART25FUUR , pls contact us : 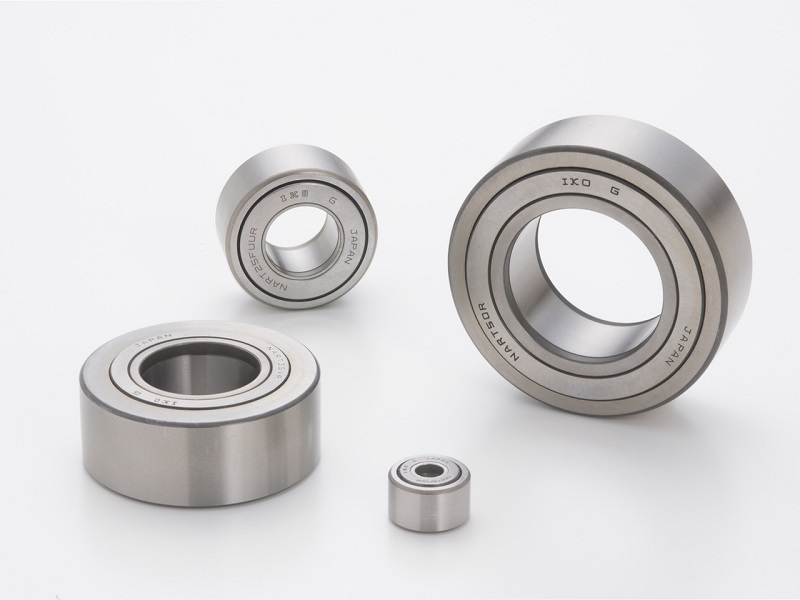 The main causes of burns are caused by poor lubrication, excessive neck load, improper clearance selection, improper bearing configuration, poor contact on the raceway surface, and excessive stress. Such as;

1) In the axial free-running bearing, if the external factor is too tight, it cannot be moved in the housing hole;

2) When the operating temperature of the bearing increases, the thermal expansion of the shaft causes a large axial force, and the bearing cannot move axially;

3) Due to insufficient lubrication, or unreasonable selection of lubricants, quality problems, aging and deterioration, etc.;

4) The temperature difference between the inside and outside is large, and the upstream gap is not selected properly. The external expansion is small and the internal cause is excessive, which causes the bearing temperature to rise sharply;

5) The excessive load on the IKO bearing and the uneven distribution of the cutting load form stress concentration;

6) The surface of the parts is rough, causing poor contact or difficulty in forming oil films.

The morphological characteristics of burns can be judged according to the color of the surface. Due to lubricant, temperature, corrosion and other reasons, the surface of the parts will change during the use of IKO bearings. The main colors are light yellow, yellow, brown red, purple blue and blue black. Among them, light yellow, yellow and brown red chips are Discoloration, if there is purple blue or blue black is considered burn. Burns are likely to cause the surface hardness of the parts to drop or micro-grains to appear.