Those whose shaft and bearing gap is in surface contact are called sliding bearings. Because it is in surface contact, it can withstand large external forces, is earthquake-resistant, and has a simple structure and is widely used. For example: the movable joint of the strange hand of the excavator.

INA sliding bearings can be divided into three types according to the direction of force, namely:

The force direction of radial sliding bearings is perpendicular to the central axis, which can be divided into three types according to the form:

(2) Matched bearing: This kind of bearing is easy to install and disassemble, and the price is low, and it is widely used in machinery. For example, INA bearings on cranks of various internal combustion engines.

The materials of sliding bearings are mostly cast iron and cast steel. Because of the hard texture, it is easy to cause the journal to wear, so a bush is usually added between the shaft and the bearing. The material of this kind of bushing is mainly bronze, white alloy and Babbitt alloy.  INA NK90/35 bearings online , pls click here : 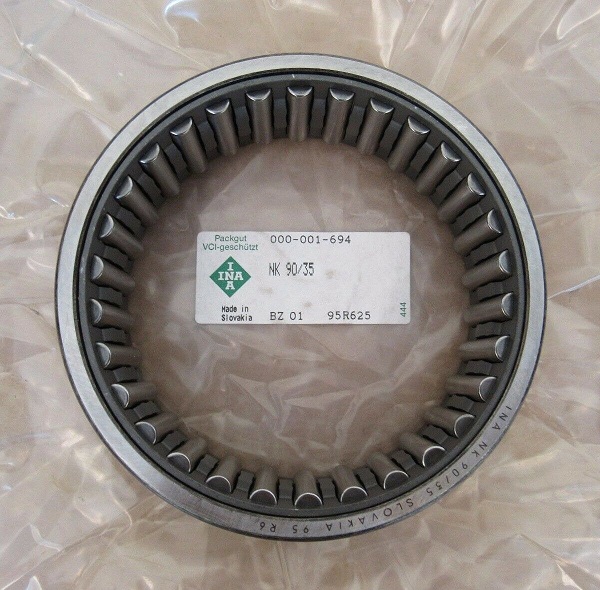 a. Single-ring thrust bearing: can bear axial thrust in both directions.

b. Multi-ring thrust bearing: This kind of shaft can bear bidirectional, high-speed and heavy-load axial thrust.

Also known as pivot bearing, it is a sliding thrust bearing installed on the shaft end, so it is also called base column thrust bearing.

When the bearing unit load is too large, it is impossible to build an oil film from a static start, so hydrostatic bearings must be used. The fluid (oil) is sent between the two parts under pressure by the pump to maintain lubrication during operation. Because the fluid is supplied from outside, it is also called external pressure bearing. If the pump oil pressure is changed to air pressure, it is called static pressure air bearing.

(2) Oil-free bearing: It has excellent abrasion resistance and is suitable for food processing machinery with light load and no pollution.