The thrust ball bearing is composed of shaft washer, seat washer, cage and 11 steel balls. Among them, the raceway of the shaft ring is severely worn, and rough pits can be seen locally, and the edge of the raceway is protruding and "climbing" phenomenon due to wear and extrusion; the overall damage of the seat ring is lighter, and the surface of the raceway is golden yellow and smooth , Small pits and rolling grooves can be seen locally. All 11 steel balls showed high temperature discoloration and turned dark black, 3 steel balls were broken, 8 steel balls were relatively intact and all showed different degrees of wear or extrusion damage. Some steel balls were stuck in the pockets and could not be rotated. Worn, raised edges.

The fracture characteristics of the three broken steel balls are basically the same. The macroscopic surface of the fracture is blue-black and the surface is severely worn. The microscopic features are mainly dimples. Locally, there are mixed features of intergranular and dimples, showing the characteristics of overload fracture. IKO RNA4909 bearings online , pls click here : 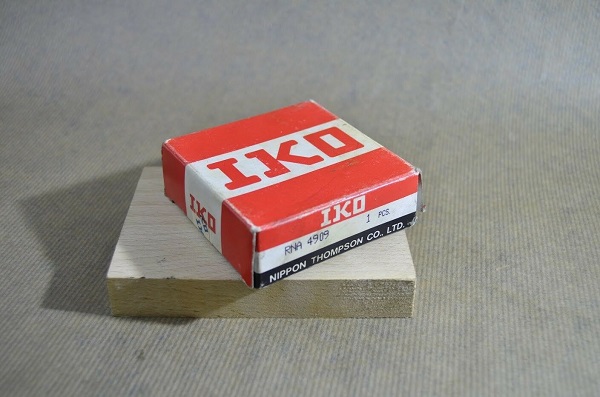 There were no signs of fatigue peeling on the shaft ring, seat ring and steel ball of the faulty IKO bearing, indicating that the main manifestation of the initial bearing failure should be wear. After consulting the previous data, it was found that the previous fault appearance of the bearing was basically similar, and the bearing shaft ring was seriously worn. The surface of the ball has a large area of wear and blackening, and it cannot rotate when stuck in the pocket of the cage.

This phenomenon should be due to the large amount of metal scraps produced by wear and tear in the cage pocket during the failure of the IKO bearing, which hinders the rotation of the steel ball until it jams, and finally the bearing shaft ring and the steel ball cage The components have severe sliding wear.

When the IKO thrust bearing is assembled and used in the pump, the outer diameter of the seat ring is not positioned. The positioning is mainly achieved by the pre-tightening force generated by the outer end surface pressed by 6 springs. The bearing has to bear the alternating axial eccentric load during the working process. The ring will inevitably have a certain radial swing, resulting in a radial offset. With the increase of the radial movement of the seat ring, the contact angle will be significantly reduced. In severe cases, the steel ball may appear "climbing". The occurrence of the "slope" state can ultimately be judged from the abnormal contact marks of the shaft ring or raceway channel.

4.The radial swing of the bearing seat

If the IKO bearing is installed, the shaft ring is incorrectly positioned, forming an initial eccentricity, and under the action of the alternating axial eccentric load during the working process, the bearing race will have a certain radial swing again, and the two superimposed, will make the seat The radial movement of the ring increases significantly, which will inevitably cause the bearing to run unstable and deviate from the normal working track, leading to early wear of the working surface of the bearing parts.

The channel edge of the bearing shaft ring in this failure was severely worn. Due to abrasion and compression, the edge of the channel was raised and appeared a typical "climbing" phenomenon, and there were no signs of fatigue peeling on the shaft ring, seat ring and steel ball. , Indicating that the main manifestation of bearing failure in the early stage should be wear, and the occurrence of wear should be related to the unstable operation of the IKO bearing during the working process, and the deviation of the contact position between the steel ball and the raceway from the normal working track.

Eric Bearing Limited, Your trustworthy bearing supplier, providing Variety Top Brand Bearings. As a leading bearing distributor in Asia, ERIC BEARING LIMITED has high visibility in our customers, with our products being exported to over 100 countries. We have more than 8 years of export experience that can help you find the ideal purchasing solution. If you are looking for IKO bearings or have any questions about bearings, please feel free to contact us.